Health and Economic Burdens of Stroke and Atrial Fibrillation

Stroke is the number five cause of death and a leading cause of long-term disability in the U.S.1 It accounted for 1 in every 20 deaths in 2013 and costs the U.S. an estimated $33 billion each year.2 A stroke is caused when the blood supply to the brain is suddenly interrupted, usually because a blood vessel bursts (hemorrhagic stroke) or is blocked by a clot (ischemic stroke).3 As a result, brain tissue is damaged due to the lack of oxygen and nutrients.3

The most common symptom of stroke is a sudden weakness or numbness of the face, arm or leg, typically on one side of the body.3 Other recognizable symptoms include: difficulty speaking or understanding speech; difficulty seeing with one or both eyes; difficulty walking, dizziness, loss of balance or coordination; severe headache with no known cause; and fainting or unconsciousness.3 Stroke is a global epidemic; more than 15 million people worldwide suffer from a stroke each year,4 and about 85 percent of all stroke-related deaths are registered in low- and middle-income countries.5 These countries also account for 87 percent of total losses due to stroke in terms of disability-adjusted life years.5 It is currently the No. 1 cause of death in a number of emerging economies, including China.6

Approximately one-half of stroke survivors are left with some degree of physical or cognitive impairment.5 As a result, they may need support for common activities of daily living (ADL), which directly impacts their quality of life and their relatives who often take on the role of caregiver.5 It is important to recognize the significance of such informal care, as it is relevant in maintaining stroke survivors in the community and providing a valuable economic resource for health care systems.5

Stroke Due to Atrial Fibrillation

There are a number of risk factors for developing stroke including, but not limited to, obesity, diabetes, cigarette smoking, and cardiovascular disease. One such cardiovascular (CV) condition called atrial fibrillation (AF), a type of irregular heartbeat, is a significant risk factor.7 A particular type of AF, known as non-valvular atrial fibrillation (NVAF), (or AF not caused by a heart valve problem), can be fatal and is the cause of about 15 percent of all ischemic strokes and as many as 30 percent of strokes occurring in people in their 80s.8 Recent estimates in the U.S. has AF affecting an estimated 2.6 to 3 million Americans;9 with approximately 795,000 people experiencing a new or recurrent stroke each year.10

Worldwide in 2010, an estimated 33.5 million individuals had AF, with close to 5 million new cases each year.11

Atrial fibrillation may lead to significant negative health outcomes, including a fivefold increased risk of stroke, as well as hospitalization, impaired quality of life, and decreased work productivity. Stroke is a costly disease from individual, family, and societal perspectives. The health consequences of AF-related stroke can be devastating. Outcomes in patients with AF-associated events (e.g., thromboembolic infarctions) are often poor, and may result in severe permanent neurologic deficit or death.

Age is one of the most substantiated risk factors for stroke; therefore the aging of the world population leads to a growing number of persons at risk. Stroke risk attributable to atrial fibrillation (AF) also increases with age, rising from 1.5 percent in patients aged 50 to 59 years to 23.5 percent for patients aged 80 to 89 years.2 Consequently, it is the elderly who are at greatest risk for stroke and its clinical, economic, and social burdens. 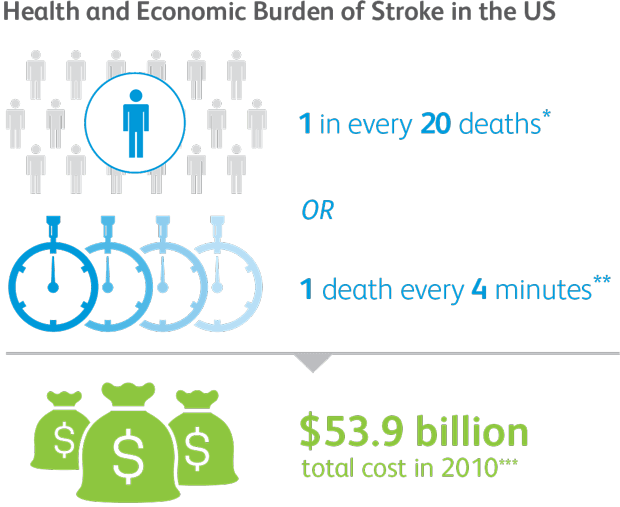 The World Health Organization (WHO) recommends drug therapy for prevention and control of heart attacks and strokes because it is feasible, high impact, and affordable (even in low- and middle-income countries).16 Drug therapy is considered more cost-effective than conventional single-risk factor interventions that address only hypertension or hypercholesterolemia.16

The American Heart Association and the European Society of Cardiology have developed treatment guidelines for AF/stroke based upon stroke severity, other underlying medical issues, and the length of the AF disease. For most patients, medication has proven to be a highly effective option.17 Untreated AF may lead to abnormal heart rhythm that can be difficult to treat. Thus, additional medicines may also be prescribed in order to control heart rate and rhythm in longterm, untreated AF patients.17 Medications are often prescribed to not only treat AF, but also to prevent blood clots that can lead to a stroke. Medication options include blood thinners (e.g., antiplatelet, anticoagulant), heart rate controllers (e.g., beta blockers, calcium channel blockers), and heart rhythm controllers (e.g., sodium and potassium channel blockers). Such treatments can help to significantly reduce both the direct and indirect negative health outcomes, as well as the costs associated with untreated AF.9

New and innovative medications have been developed to reduce the risk of AF-related stroke, providing prescribers more treatment options to reduce the risk in patients with NVAF. The newer anticoagulant therapies, also known as Novel Oral Anticoagulants or NOACs, work either as direct thrombin inhibitors, which prevents the conversion of fibrinogen to fibrin, or as selective factor Xa inhibitors, which work on the preceding step in the coagulation cascade to prevent the conversion of prothrombin to thrombin. Another goal of these new therapies is to reduce the risk of bleeding, which is a serious and sometimes fatal adverse event of anticoagulants. The results of a large meta-analysis involving over 50,000 patients showed that in patients with NVAF, these newer therapies decreased the risk of stroke; which was mainly driven by fewer hemorrhagic strokes and decrease in mortality.18 As with any medication, it is important for the physician and patient to carefully evaluate the benefits and risks of any therapy used to treat AF.

Biomedical innovation continues to improve upon noninvasive treatments for patients with AF. The value of medicines in the prevention and treatment of atrial fibrillation of stroke shall also continue to grow, as more older individuals have access to medical care.