Inflammation is a critical response to potential danger signals and damage in organs in our body. In diseases such as rheumatoid arthritis, lupus, ulcerative colitis, Crohn’s disease and others, the immune system turns against the bodies’ organs. These painful and, in some cases, progresively debilitating conditions can take a toll on people’s quality of life and create both societal and economic burdens

The inflammatory process in the body serves an important function in the control and repair of injury. Commonly referred to as the inflammatory cascade, or simply inflammation, it can take two basic forms, acute and chronic. Acute inflammation, part of the immune response, is the body’s immediate response to injury or assault due to physical trauma, infection, stress, or a combination of all three. Acute inflammation helps to prevent further injury and facilitates the healing and recovery process.

When inflammation becomes self-perpetuating however, it can result in chronic or long-term inflammation. This is known as chronic inflammation, and lasts beyond the actual injury; sometimes for months or even years. It can become a problem itself, and require medical intervention to control or stop further inflammation-mediated damage.

CHRONIC INFLAMMATION MAY ALSO SERVE AS A PRECURSOR TO CERTAIN CANCERS. PERSISTENT INFLAMMATION IS ASSOCIATED WITH DNA DAMAGE, WHICH IN TURN CAN LEAD TO CANCER.4 FOR EXAMPLE, PEOPLE WITH CHRONIC INFLAMMATORY BOWEL DISEASES (IBD), SUCH AS ULCERATIVE COLITIS (UC) AND CROHN’S DISEASE (CD), HAVE AN INCREASED RISK OF COLON CANCER.5

The evidence suggests that the number of people suffering from chronic diseases such as cardiovascular diseases, diabetes, respiratory diseases, autoimmune diseases, and cancers has increased dramatically over the last three decades. The increasing rates of these illnesses suggest that chronic inflammation, caused by excessive and inappropriate inflammatory activity, which in turn leads to chronic inflammatory activation in the body, can be a contributing factor in the pathology of these diseases.1,7,8,9 There is further evidence suggesting that successful treatment of chronic inflammation (i.e., reduction of inflammation) might reduce the risk of cardiovascular disease.10

Rheumatoid arthritis (RA) is a chronic, systemic (potentially reaching the whole body) inflammatory disorder that typically affects the small joints in hands and feet. RA is an autoimmune disease, where a person’s immune system attacks joint tissues and potentially other body parts/organs for unknown reasons. As the disease progresses, symptoms may spread to the wrists, knees, ankles, elbows, hips, and shoulders. As a result, RA causes pain, inflammation, and eventually joint damage and malformation. RA can cause people to feel sick, tired, and feverish; it also damages joints symmetrically, where joint pain is felt on both sides of the body.17 RA differs greatly from osteoarthritis (OA), which is a degenerative joint disease that only limits joint function.8

A U.S. study in 2010 found that the annual out-of-pocket costs were $1,193 for patients with RA, with annual excess out-of-pocket costs of $510 per privately insured patient.23 In the same study, the annual total costs for the privately insured and the Medicare populations were estimated to be $306 million and $600 million, respectively. Excess per-patient costs for uninsured RA patients were estimated to be $5,758, which, when weighted by the uninsured prevalence, aggregates to an annual total cost of $560 million.24,25

In the U.K., the National Audit Office (NAO) estimated that in 2009, RA cost the National Health Service (NHS) around £560 million a year, with the majority of this in the acute sector, and that the additional cost to the economy of sick leave and work-related disability was £1.8 billion a year.26 Results from a 2011 U.K. study indicate that an increase in earlier treatment for RA patients could produce significant benefits in terms of productivity, with gains of £31 million for the economy due to reduced sick leave and lost employment. A ccording to the U.K.’s NAO, 10 percent of patients with RA are treated within 3 months of symptom onset; economic modelling suggests that increasing this to 20 percent would initially cause an increase in costs, but earlier treatment could become cost-neutral after nearly 9 years.26

Psoriatic arthritis (PsA) is a form of inﬂammatory arthritis, which is a chronic, autoimmune disease that can be severe at times.27 Approximately 30 percent of patients who have the chronic skin condition psoriasis will also develop psoriatic arthritis.28,29 Patients who suffer from PsA inflammation suffer from painful swelling in the joints of the hands and wrists.28 In addition, PsA can also cause changes to the nails, such as pitting or separation from the nail bed.28 The resulting prolonged inflammation eventually leads to joint damage; thus early diagnosis and treatment is necessary to slow and/or prevent joint damage.30 PsA affects approximately 3 million people in the U.S. and Europe combined.31 The most recent epidemiological study indicated that PsA affects an estimated 1.3 million patients in the U.S. population, and many rate it as a large problem in everyday life.32 The prevalence may be even higher because PsA is often misdiagnosed or altogether undiagnosed.33,34 The onset of PsA typically occurs between the ages 30 and 50.35 Men and women are equally affected by this condition, and it is more common among Caucasians than Africans or Asians.35

PsA imposes a considerable economic and quality-of-life burden to patients and society, and can contribute to reduced physical and psychosocial health-related quality of life. Many patients also report physical limitations, impaired emotional well-being, and general fatigue due to their PsA.33 This in turn results in direct medical costs from the utilization of health care resources. The resulting functional limitations add to indirect costs such as disability and lost productivity and are substantial drivers of the total costs of care. 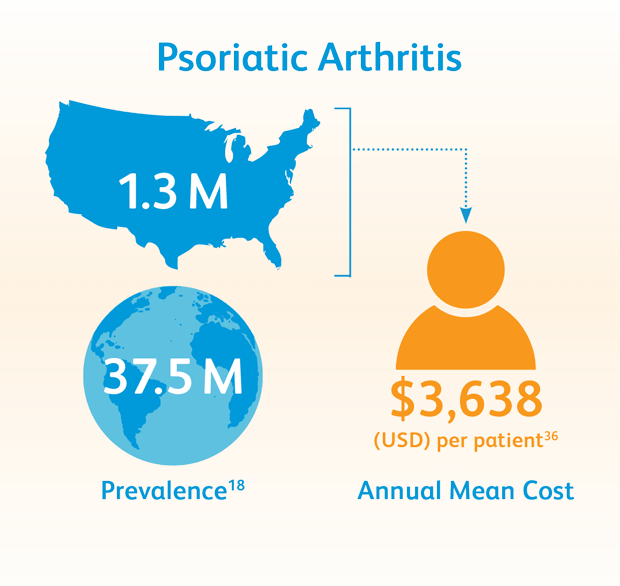 Inﬂammatory bowel disease (IBD) describes conditions with chronic or recurring immune response and inﬂammation of the gastrointestinal (GI) tract.38 The two most common inflammatory bowel diseases are ulcerative colitis (UC) and Crohn’s disease (CD). UC specifically affects the large intestine whereas CD can affect any part of the GI tract.39

Symptoms of UC frequently include blood- and mucus-containing diarrhea, severe cramp-like abdominal pain, anemia, loss of appetite, weight loss, fatigue, severe urgency to have a bowel movement, and tenesmus (the feeling of incomplete evacuation).40 People with moderate to severe UC have reported a negative impact on education, career, social/personal life, relationships and depression.41 Surveys have shown people with UC report feeling anxiety and stress about their disease.42 More than 70 percent of people with UC have reported that symptoms affect their ability to enjoy leisure activities and nearly two-thirds report that their UC symptoms impact their work performance.43

Approximately 1.6 million Americans currently have IBD, a growth of about 200,000 since the last time the Crohn’s and Colitis Foundation of America reported this ﬁgure in 2011. As many as 70,000 new cases of IBD are diagnosed in the United States each year. There may be as many as 80,000 children in the United States with IBD.44 In 2012, there were approximately 233,000 Canadians living with IBD (129,000 individuals with CD and 104,000 with UC).45An estimated 2.5–3 million people in Europe are affected by IBD.46 In Asia, we see that the incidence of IBD is on the rise. Thirty years ago, fewer than 1 in 1 million people in Hong Kong had IBD. Today roughly 3 in 100,000 people in Hong Kong have a new diagnosis of IBD.47

In the U.S., COPD is the third most common cause of death.13 Three million people are estimated to suffer from COPD in the U.K. and the disease kills around 30,000 people a year, more than breast, bowel, or prostate cancer. In France, there are 3.5 million COPD sufferers (6 percent prevalence of adult population) and 16,000 deaths every year.48

While acute inflammation is a part of the body’s natural defense system against injury and disease, chronic inflammation is considered a disease in itself. Since chronic inﬂammation affects speciﬁc areas of the body and may be associated with a deﬁned disease process, the treatment approaches vary considerably.49 For decades, physicians relied on steroids to suppress immune response. Though an important option, steroids come with common side effects such as weight gain and with potentially harmful side effects such as enlargement of the heart and liver cancer. Today, as science has advanced, new classes of therapies have been developed that are transforming the management of inflammatory diseases by targeting other key proteins and pathways in the body.Today, patients living with chronic inﬂammation and inﬂammatory disease have newer options for treatments with the development of more selective agents that go beyond broad immunosuppressive treatments. The ability of scientists to better understand the underlying disease biology and identify groups of patients, through precision medicine, who will respond best to certain treatments, can potentially lead to new and innovative medicines.

Overall, the estimated prevalence of chronic inflammatory disease in Western society is 5 to 7 percent.1

Chronic inflammatory disease patients are at greater risk for developing another inflammatory-related condition.

In Europe the direct healthcare cost incurred by patients affected by IBD, have been estimated to be €4.6–5.6 billion per year.2

The Value of Medicines for Psoriasis