Company Introduces School-Age Girls to the Wonders of Science 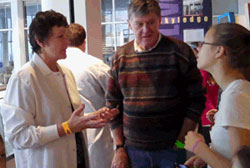 Two Pfizer scientists from Groton Labs introduced hundreds of young women to the wonders of science at Girls & Science, a special event at the Science Museum of Minnesota.

Pfizer was a major sponsor of the event, held recently at the museum in St. Paul. More than 5,000 people, mostly school-age girls, braved a winter storm to attend and discover career opportunities in math, science and technology.

"I always enjoy the one-on-one interaction with the students," said Kim Stutzman-Engwall, Associate Research Fellow, Neuroscience Research, and a Pfizer Science Ambassador. "They are so eager to do hands-on experiments."

Stutzman-Engwall and Amy Orce, Scientist, Analytical R&D, helped youngsters conduct an experiment in which they extracted DNA from green peas. At least 700 students stopped by the Pfizer booth throughout the day.

"The best part of the Girls & Science experience was being able to reach out to so many young ladies in such a short period of time. It was wonderful to have their parents there to see with them what is out there for the future," Orce said.

Pfizer also used its sponsorship to educate the general public about its commitment to science and community. The day before the event, Stutzman-Engwall and Orce appeared live on the set of KMSP Fox 9's morning news show, where host Tom Butler donned a Pfizer lab coat and extracted DNA in front of the TV cameras. To see a video of the morning news show, click here.

Stutzman-Engwall said the value of events such as Girls & Science is showing students "that scientific research can be an interesting and fulfilling career, but if they aren't interested in pursuing science as a career, that they can at least not be intimidated by it."

"We had several high school-age students stop by the table to discuss what classes they should be taking and ways they can get experience outside the classroom," she said. "We may have seen some future Pfizer interns!"

"I hope we gave the girls, and their parents, the message that they can be whatever they want to be," added Orce. "It is important to consider career options that maybe are viewed as less conventional. Don't just walk a straight line — give some thought to what might be out there and go find it!"

Pfizer's involvement in Girls & Science was a partnership involving Global Media Relations and Pfizer Science Ambassadors, a program that enlists Pfizer scientists to educate external audiences on the company's research and innovation.

To see Stutzman-Engwall and Orce leading the demonstration at the Girls & Science event, click here.