Rare diseases cover a wide variety of conditions: neurological disorders, infectious diseases, rare cancers, hematological conditions, endocrine disorders, autoimmune disorders, respiratory diseases, and a variety of genetic disorders. Over half of all rare diseases affect children, and more than 80 percent have a known genetic component.1 Each country has its own unique definition for what is considered a rare disease. For example, the definition in the United States (U.S.) is a disease that affects less than 200,000 people in the country at any given time. However, in Europe, a disease is considered rare when it affects less than 1 in every 2,000 people and in Japan, if it affects fewer than 50,000 people.2 In total, some rare diseases affect only a handful of patients, while others may affect millions of patients worldwide (e.g. Sickle Cell Disease). Overall, approximately 7,000 different rare diseases have been discovered.

The psychological and financial burdens on patients with rare diseases, as well as their caregivers, can be significant. Individuals with a rare disease often receive 2 to 3 misdiagnoses and wait more than seven years before they are correctly diagnosed due to a lack of disease understanding and awareness.3 Rare diseases often render patients unable to engage in basic activities and necessitate extensive time and care from friends and relatives. Due to the daily challenges in managing a rare disease, many patients and their caregivers are unable to participate as active members of the workforce. For example, families of patients with Duchene Muscular Dystrophy (DMD) were estimated to incur $15,481 a year in lost income.4 Rare disease patients are also often pressed financially due to their high healthcare burden including costs for medical consultations, psychological assistance, rehabilitation programs, and medical treatment. Studies have indicated that the average annual cost for a hemophilia patient’s care in Europe is over €117,000, with average lifetime costs for a patient at approximately €7.8 million.5 Another study highlighted that the average annual cost of illness (both direct and indirect medical costs) for patients with Spinal Muscular Atrophy (SMA) was an estimated €70,566 per patient.6 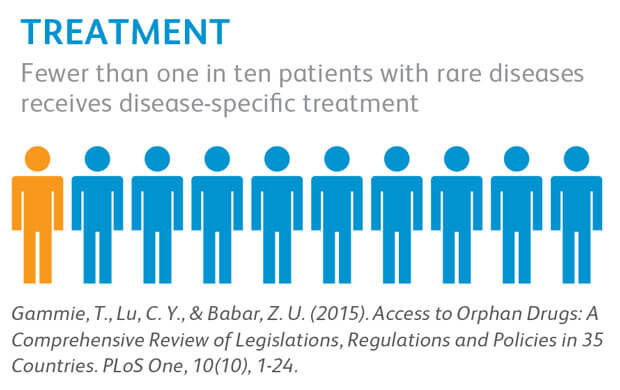 Adding to the burden, almost 80 percent of rare diseases are hereditary, which can lead to multiple members of a single family having the same disease.7 Within families, rare diseases have a significant impact on young children. In the U.S., rare diseases account for 35 percent of deaths in the first year of life and it has been estimated that 30 percent of children who have a rare disease will pass away before their fifth birthday.8 Because of the rarity of each disease itself, very little may be known about the underlying causes and natural history of many of these diseases. This poses unique challenges in developing new treatments for rare disease patients, including difficulty designing clinical trials, due to the lack of information on the natural progression of these diseases. Thus, less than one in ten patients with a rare disease receives disease-specific treatment.9 There is an urgent need for continued research to understand the natural history of rare diseases, identify genetic and epigenetic factors that are responsible for these diseases, and help to support the development of new treatments.

Despite significant challenges in the development of treatments for rare disease patients, opportunities from the improved understanding of the genetic basis of many diseases, coupled with advances in biotechnology and drug development, have led to progress in some disease areas. These new treatments have had a substantial impact on the quality of life of many rare disease patients and their families.

Hemophilia is a bleeding disorder that slows the blood clotting process due to lack of sufficient blood clotting factors (IX or VII).10 Patients often suffer from spontaneous and uncontrollable bleeding accompanied by severe joint pain. Developments in medicine have been proven to both reduce joint bleeds and bodily pain, thereby increasing the quality of life for patients.11 Patients that are put on prophylaxis treatment, which helps to maintain clotting factors and prevent spontaneous bleeding episodes, are over three times less likely to have joint bleeds and have an 83 percent reduction in joint damage.12,13 Prophylaxis treatment has also been demonstrated to reduce health care costs in the long term by preserving joint function and eliminating the high costs associated with management of damaged joints. It has been estimated that prophylaxis treatment results in savings of $8,312–$17,675 per bleeding episode in patients with severe hemophilia.14

Cystic Fibrosis (CF) is a life-threatening disease characterized by mutations in the CF transmembrane conductance regulator (CFTR) gene that cause the body to produce mucus that clogs the lungs, pancreas, and other organs.15 In the 1960s, the average lifespan for a CF patient was only 10 years.16 However, with quicker screening and diagnosis, as well as more effective treatments in place, the average lifespan for CF patients has risen to 37 years for men and 40 for women.17 The wide range of treatment options that are currently available for CF includes medicines that directly target the underlying symptoms of the disease. In 2012, the first treatment targeting the basic genetic defect in CF was approved. The arrival of this group of medicines, called CFTR modulators, signaled a historic breakthrough in how CF is treated. However, these treatments are only available for a small percentage of patients with particular mutations. Further innovations in treatments for cystic fibrosis have the potential to transform the daily life of CF patients, allowing them to lead healthier and more active lives.

Gaucher’s disease is a genetic disorder that affects organs and tissue throughout the body. Gaucher’s disease Type I is the most common form of the disorder, with over 90 percent of affected individuals having this type of the disease. Type II & III are rarer and characterized by problems that affect the central nervous system. Gaucher’s disease is caused by mutations in the GBA gene, which provides instructions for making an enzyme, which is needed to break down a fatty substance called glucocerebroside. Mutations in the GBA gene greatly reduce or eliminate the activity of this enzyme, which leads to a buildup of fatty substances to toxic levels within cells. Tissues and organs are damaged by the abnormal accumulation and storage of these substances, causing the characteristic features of Gaucher’s disease.18 This causes a multitude of painful symptoms including bone pain, enlargement of the liver and spleen, constant bruising and continuous bleeding. The most effective treatment for Gaucher’s disease is Enzyme Replacement Therapy (ERT), a treatment that replaces deficient enzymes through infusion of a new enzyme. ERT treatment has been shown in multiple studies to reduce swelling in the liver and spleen, improve bone pain and discomfort, and increase platelet counts and hemoglobin levels.19 In addition, ERT has been demonstrated to improve quality of life. One study has suggested that over a lifetime, ERT treatment leads to approximately 12.8 extra years free of end organ damage.20 In addition to ERT treatment, substrate reduction therapy (SRT) is also available and works to reduce the amount of fatty substance, glucocerebroside, produced in the patient’s body.21 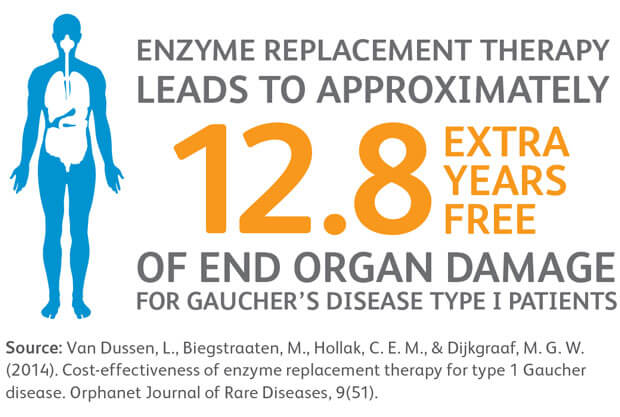 As science progresses, new innovations in technology and medicine will help to drive the development of innovative and improved treatments. For some rare diseases, innovative medicines can prolong a patient’s lifespan and quell their symptoms, giving them the ability to have a better quality of life. Since the passage of the Orphan Drug Act, the FDA has approved more than 500 rare disease drugs.22 Yet, 95 percent of rare diseases still lack any appropriate treatments and in many cases rare disease patients are only treated with medicines to help control symptoms because disease-specific treatments are not available. Future innovation is critical to ensuring that patients have appropriate treatments to permit a healthy and productive lifestyle.

For example, Sickle Cell Disease (SCD) is a genetic condition that causes red blood cells to mutate in to a “sickle” shape, which disrupts the normal flow of blood cells and causes patients to suffer from excruciating pain.23 New treatments and methods of prevention and screening have dramatically reduced mortality and hospitalization rates among Sickle Cell patients. Researchers at Johns Hopkins Children’s Center have found that young children with SCD who receive a daily dose of hydroxyurea (HU), a medicine used to reduce the number of painful crises caused by the disease, experience less pain, require fewer blood transfusions, and are 30 percent less likely to be hospitalized compared to children with SCD who did not receive HU. The treatment was also associated with a 31 percent reduction in hospitalization costs, and a 21 percent net decrease in annual direct medical costs for treating SCD—a savings of approximately $3,000 per treated child.24, 25 Despite the progress made to reduce the symptoms of a painful crisis, there is still much room for innovation in Sickle Cell treatments, as patients still lack treatment that directly targets the source of the disease. In the U.S., Sickle Cell patients still live approximately 30 years less than the general population.26

The prospect of gene therapy offers a new, powerful and exciting tool to treat many diseases, including Sickle Cell disease. Gene therapy is a technique that uses genes to treat or prevent a disease. These treatments have the potential to provide a more impactful solution to a number of diseases.27 By adding in a correct copy of a gene at its source, gene therapy has the potential to avert the ill effects of a disease. Gene therapy is showing promise in clinical trials for long-lasting treatment of diseases that cannot be addressed with current medicines. Advances in genetics have paved the way for innovations in gene therapy and benefits are believed to be on the near horizon.

Over the past few decades, there has been substantial improvement in the treatment of rare diseases. However, there is still a significant gap in the understanding of the underlying pathology of a number of diseases and limited viable treatment options exist for many patients with rare diseases. While we are seeing significant success from investments in R&D to develop treatments for patients with rare diseases, continued innovation is necessary to further progress across a greater spectrum of diseases and patients. To achieve further innovation, it is critical that countries support regulatory and reimbursement regulations to advance the development of rare disease treatments and encourage further policy development to support innovative new treatments, such as gene therapy. Medicines to treat rare diseases should be a priority for health care spending and targeted funding for rare disease treatments can provide a mechanism to support access for all patients. In addition, health technology evaluations need to capture the full societal benefit of new treatments for rare diseases. Treating rare diseases will produce positive spillover effects for society as a whole and new therapies would add immensely to the efficiency and overall value of health systems.

Download the Value of Medicines for Rare Diseases article in PDF format.

For a look at the Value of Medicines for Rare Diseases in Latin America please download the English, Spanish, and Portugese PDF files.

More than 500 new drugs for rare diseases have been developed since the Orphan Drug Act was passed.28

High unmet need still exists; fewer than one in ten patients with rare diseases receives disease-specific treatment and approved medicines are available for only 5% of rare diseases.28

For some rare diseases, medicines have dramatically improved life expectancy and quality of life.12

In the last 5 years, an average of more than 35% of all new drug approvals in the U.S. were for rare diseases.28 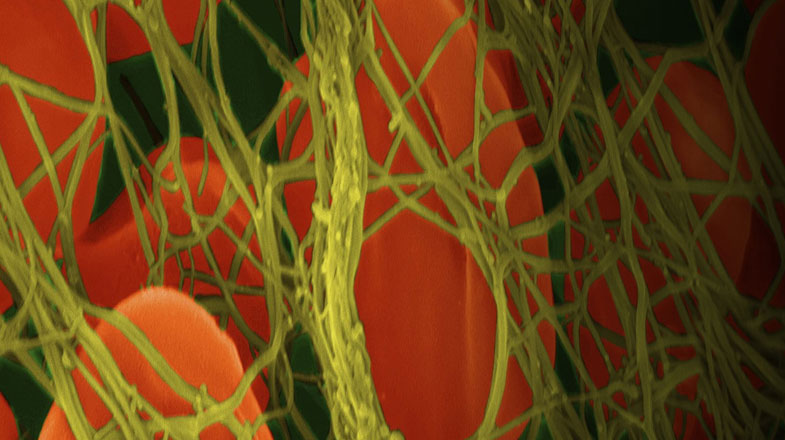 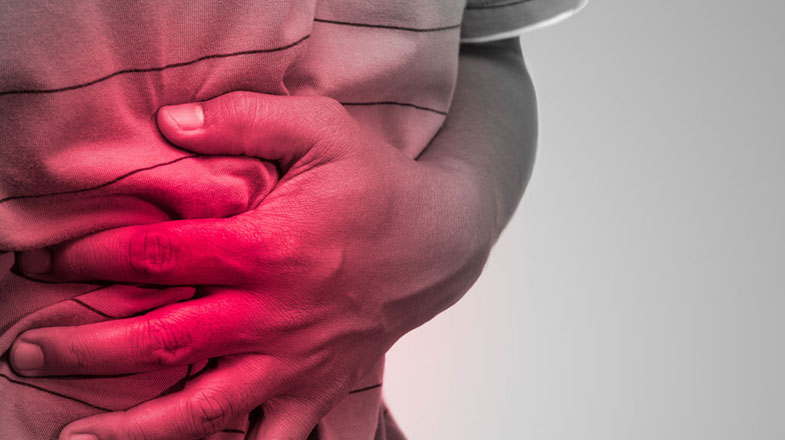