The Long, Meticulous, and Sometimes Perilous Journey of an International Vaccine

About half the world’s vaccines go to sub-Saharan Africa. Time and temperature can make getting them there safely tricky.

Refrigerators and preservatives aren’t just for food. Medicines need to stay at safe temperatures, too. This can be especially tricky when about half the world’s people who need vaccines live in sub-Saharan Africa, where the daytime temperature most often hovers around 90 degrees Fahrenheit.

Getting a vaccine ready for delivery is a painstaking journey in itself. It can take nearly three years to make a pneumococcal vaccine, for example, say researchers in Pfizer’s Global Supply. One batch equals about 240,000 individual doses. The meticulously calculated doses are poured into vials or syringes, the latter for transport to developed countries, the former for developing countries where infrastructure can be lacking.

That process gets repeated some 170 million times a year.

Once the vaccines are created, they’re immediately kept at a controlled temperature, somewhere between 2 and 8 degrees Celsius. Freezing ensures that the vaccine remains stable. Otherwise, it can ‘age,’ for want of a better term, and its characteristics can change, which means the vaccine could lose effectiveness, ruining the treatment and dashing all of the precision work that went into making it. 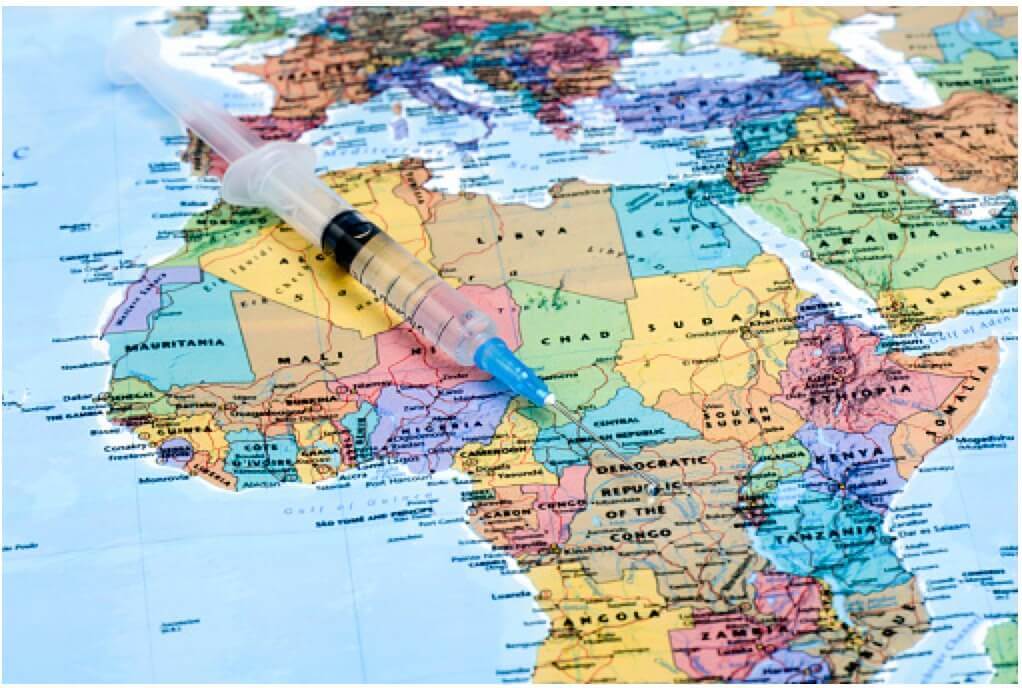 The shelf life of a dose of a pneumococcal vaccine stored in controlled temperatures, for example, is three years, during which time it remains entirely stable and effective. But at 30 degrees Celsius (about 90 degrees Fahrenheit), stable shelf life decreases to 25 days. At 40 degrees Celsius (about 105 degrees Fahrenheit), that time frame is cut even more drastically, to two or three days.

Those sweltering temperatures are daily realities for a full half of the world’s vaccine recipients. In sub-Saharan Africa, even the doctor’s offices are without air-conditioning, which means investments in infrastructure are needed to help in providing temperature-stable places.

Distance from port to medical outpost along with potential theft are also factors that can affect the timely and safe delivery of vaccines. Two measures help ensure that each vaccine gets to the right place in top condition:

1.    Every single vial can be traced back to its origin through its barcode, even to the place and exact time of manufacture, countering both theft and counterfeiting.

2.    Tamper-resistant labeling identifies potential foul play. Some elements are visible, such as a seal; some are known only to the authorized personnel.

The dynamic nature of disease is also a factor in effective vaccine delivery. There are some 300 vaccines in global development today, but diseases change. Scientists keep their eyes on epidemiology studies for such changes, and on the introduction of existing diseases into new spheres. For example, pilgrims traveling to the Hajj can bring back unwanted germs. Or an outbreak can occur, such as the measles uptick in Brooklyn in 2013, which was traced to a community whose members were not vaccinated.

Is it always the exact same process and recipe then? Or do vaccines change over time, too? There are 90 strains of pneumococcal pneumonia, for example. One vaccine treats for 13 at the moment. But if the epidemiology of the disease evolves, other strain treatments would be added.

One recent vaccine recipe tweak was the addition of a preservative to the vials that will be delivered to emerging countries. The preservative allows for safe reuse of the vaccine vial four times after it is opened. That’s important when you might have 100 people lined up outside a clinic. People need to be treated when they can make the journey and, in remote places, when there’s a doctor on hand. Fifty-mile walks are not unheard of to bring babies to these vaccination centers. In short, these multi-use vials can cover a lot more people without using as much fridge space.