The Action-Packed Search for Stability: A Breakthrough in the Fight Against RSV 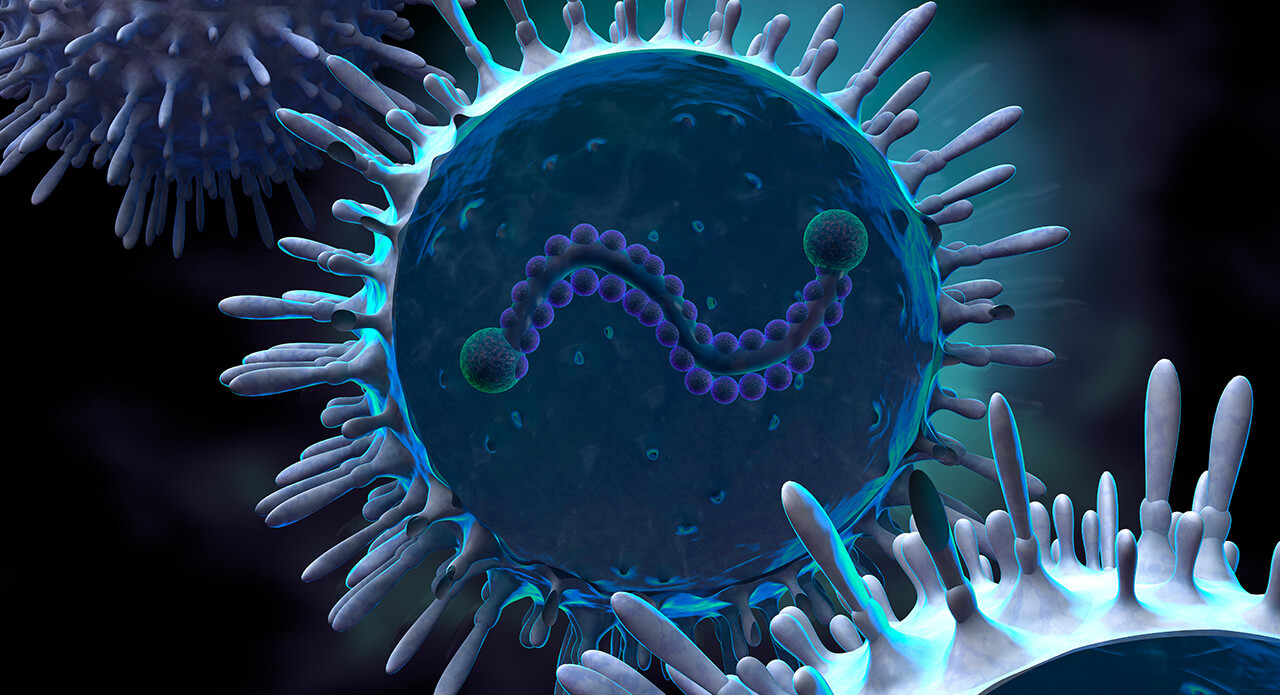 When most people catch RSV, they get a mild cold and recover quickly. But some — especially infants and the elderly — can get very sick. Infants can develop pneumonia or bronchiolitis, an inflammation of the small airways in their developing lungs that can lead to respiratory distress and the need for ventilator support. In the elderly, RSV can exacerbate underlying lung diseases.

The combination of decades of research efforts, a discovery by the National Institutes of Health, a mind-blowingly powerful microscope, and computational know-how has us closer than ever to a vaccine with the potential to protect vulnerable populations against RSV.

On a biological level, when someone is infected with RSV, the virus passes through the person’s cell membranes and gets inside their cells, where it reproduces and spreads. For researchers, interrupting the ability of the virus to fuse its membrane with the person’s cell membranes, which then leads to infection of the airways, may be a key to developing an effective vaccine. The virus uses a special type of protein called a fusion (F) glycoprotein to pass through the cell membrane. The F protein is a molecular device that completely changes its shape in the process of fusing viral and cell membranes. While on the virus before infection, the protein is in a “prefusion” form, but as it interacts with the cell membrane it rearranges into an inactive, “postfusion” form.

In 2013, the NIH made a breakthrough discovery by figuring out the detailed crystal structure of prefusion RSV F. The NIH team also showed that the RSV-neutralizing antibodies in humans are directed toward this prefusion form. The identification of the prefusion crystal structure made it possible for researchers to develop sophisticated methods to modify the sequence of F to prevent it from switching to the postfusion form, a prerequisite to develop a vaccine that can potentially produce antibodies that could neutralize the prefusion F protein.

Pfizer’s research team knew that whoever came up with a truly stabilized prefusion molecule would likely be able to make an effective vaccine. “When we saw the NIH data,” says Kena Swanson, Senior Principal Scientist in Pfizer’s Vaccines Research & Development Unit, “we jumped on it to see if we could find a highly stable protein”.

Four years later, Swanson and her colleagues, who are based in Pfizer’s Pearl River, NY site, have developed a candidate vaccine that we hope will move on to clinical trials in humans.

Finding the Most Stable Form, with High-Powered Help

“We narrowed down 360 candidate forms of the prefusion protein to one by screening them for stability and the desired immune response,” says Phil Dormitzer, Vice President and Chief Scientific Officer in Pfizer’s Vaccines Research & Development Unit. In order to understand what might lead to both stability of the prefusion form and the ability to elicit the right antibody response, the team had to have a clear understanding of what the protein looked like and which binding sites were most important to meet both of those criteria.

This narrowing-down process required computer-aided antigen design using high-performance computing capabilities and a microscope powerful enough to let the team see the protein structure and the antibody binding sites in more detail. Called a cryo-electron microscope, or cryo-EM, it is a van-sized microscope in Pfizer’s Groton, Connecticut, site, and it has been fully operational since 2016. Its strength is that it can create high-resolution models of molecules much more readily than X-ray crystallography and other standard methods.

“Seeing the prefusion RSV F protein in atomic resolution was incredible,” says Ye Che, Senior Principal Scientist and Lab Head of Computational Design at Pfizer. “Not only we could create blueprints for millions of new antigens with great stability, but we could also computationally analyze minute details of the way the antigens interact with antibodies. The structure-based design approach helped the team significantly narrow down the pool of potential vaccine candidates before we even stepped into the lab.” Swanson agrees: “Investment in technology helped us make progress toward solving a problem that had stymied scientists for years.”

When the stakes are high, the motivation to keep pushing the science forward is high, too. Says Dormitzer: “Our hearts are with the infants.”