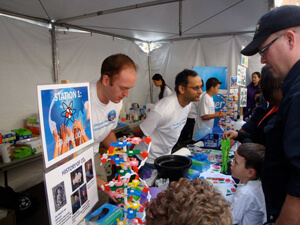 Pfizer colleagues volunteered their time over a recent weekend to share the wonders of science with visitors to the San Diego Festival of Science and Engineering Expo Day. The March 24 event — designed to showcase San Diego's science and engineering community — was the culmination of a week that drew approximately 27,000 attendees to 146 interactive booths at Petco Park.

"Finding Pfizer colleagues willing to share their knowledge in a fun way with future generations of scientists is easy," said Elana Parker, Pfizer La Jolla's Business Administrator, who has spearheaded the site's participation in the event for the past three years. "It's a great way to demonstrate to our community Pfizer's focus on science."

A group of 14 La Jolla colleagues — some of whom brought their children — volunteered their time to make the Pfizer booth a key attraction at Expo Day.

"I had so many kids tell me that they wanted to be scientists when they grew up, so it seemed like this event and our booth were really making a difference," said Matt Falk, Senior Associate Scientist, Biochemical Pharmacology and Screening. "Even the parents got a kick out of it and were very interested in the science going on at Pfizer." 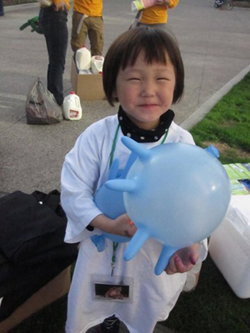 At the Pfizer booth, colleagues performed two activities that utilized carbon dioxide (CO2). Also known as dry ice, it behaves as a refrigerant to transport food and the CO2 produced by baking products causes dough to rise.

To showcase the versatility of this everyday molecule, the scientists conducted an experiment called "CO2 Bubblemania" (adapted from "Steve Spangler's Science" website). As dry ice is placed in lukewarm water, white clouds or smoke immediately form, which is controlled and passed through a tube submerged in soap water, resulting in a bubble. Bubbles are known to pop readily in the presence of oils or dirt. However, they tend to bounce on softer surfaces such as gloves or towels, which are free of oil and dirt.

The other activity, called "CO2 Balloons," involved placing a small piece of dry ice in an elastic laboratory glove, then tying it off. As the dry ice sublimes into a colorless gas, it expands the glove like a balloon.

According to Pfizer's Angelica Linton, Principal Scientist, Medicinal Chemistry, high school students took videos of the bouncing bubbles with their mobile phones to post on social media sites or send to friends. "Having teenage kids of my own, I know how difficult it is to find things that get them excited. So imagine what I felt on the success of the CO2 bubbles," she said.

Ping Wei, a Principal Scientist in Pfizer's Oncology Research Unit, brought her son and daughter, Kyle and Emily, and one of Emily's friends. Together they volunteered at the Pfizer booth for more than three hours. ýMy son, who is 9, helped with the lab glove trick, and said at one point, 'Mom, it is really great to help!' " said Wei.