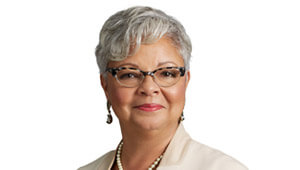 During her 35-year career in medicine, Freda Lewis-Hall has been on the frontlines of health care from the standpoints of a clinician, a researcher, and a leader in the biopharmaceuticals and life sciences industries. The common thread throughout has been her passion to advocate for health equity and improved outcomes for all patients.

Trained as a psychiatrist, Dr. Lewis-Hall began her medical career in patient care and became well known for her work on the effects of mental illness on families and communities and on issues of health care disparities. She has held positions of leadership at the Howard University Hospital and College of Medicine, Vertex, Bristol-Myers Squibb, Eli Lilly and Pfizer. Some of her many achievements include founding the Lilly Center for Women's Health in the 1990s; serving on the board of the U.S. Patient-Centered Outcomes Research Institute (PCORI) since its inception in 2010; creating Pfizer's public health information program Get Healthy Stay Healthy in 2012; launching the industry's first public compassionate access request portal, PfizerCARES, in 2015; and spearheading the creation of SpringWorks Therapeutics, a new company working to develop promising new treatments in underserved areas of urgent medical need, in 2017.

From 2009 to 2018, Lewis-Hall served as Pfizer's Chief Medical Officer, responsible for the safe, effective and appropriate use of Pfizer's medicines and vaccines, and in this role she reshaped Pfizer's medical policies and practices to intensify the company's focus on patient engagement and inclusion. In her current role as Chief Patient Officer of Pfizer, Lewis-Hall is working to extend the reach of Pfizer's patient-facing health information and education and amplify the voice of the patient inside and outside Pfizer.

Dr. Lewis-Hall is a Distinguished Fellow of the American Psychiatric Association and serves on the boards of SpringWorks Therapeutics, Dell Medical School, Harvard Medical School, FasterCures - a Center of the Milken Institute, the Foundation for The National Institutes of Health (FNIH), and PCORI. She earned her undergraduate degree at Johns Hopkins and her medical degree from Howard University College of Medicine. She has been named one of 2019's “Most Powerful Women in Business” by Black Enterprise and was a Healthcare Businesswomen's Association “Woman of the Year.” She speaks frequently at venues from the Aspen Ideas Festival to the Essence Music Festival, appears regularly as a medical expert on television shows including The Doctors and Dr. Phil, and shares health and medical information at GetHealthyStayHealthy.com.