“If we want to get the most from the data, analysis, and experiment, more often than not, it requires early partnership between scientists and biostatisticians in the design and analysis plan,” says Vice President, Head of Early Clinical Development Biostatistics at Pfizer Jared Christensen, who is based at the company’s Kendall Square research site in Cambridge, Mass.

At Pfizer, biostatisticians are involved in every stage of the drug development process, from early target selection to testing molecules in cell models through late-stage clinical trials involving thousands of patients. They’re extensively involved in helping analyze genome-wide association studies (GWAS) and other kinds of molecular data, developing assays to measure vaccine response, working to optimize or select molecules with chemists, as well as helping the digital medicine and imaging teams develop endpoints for clinical studies. Indeed, statisticians can collaborate with any discipline that relies on data.

“Baked into every statistician”

Biostatisticians are relied upon for their expertise in applying the scientific method through the lens of statistical rules. “Baked into every statistician is someone who is intimately familiar with the scientific method in a way that’s very different from scientists,” says Christensen. “When we work together with a physician, a biologist, or a chemist, we’re able to create something that asks the right scientific questions in a pointed way, and that collects unbiased data to draw a strong and objective conclusion.”

In oncology, scientists rely on data from tumor samples to understand the effect of a drug candidate or to guide the next generation of science.  Statisticians work with bench scientists to gather data from samples in optimal ways and to help them understand the variability in their data.  When analyzing samples, statisticians will help to identify potential sources of extra variation.  In lab experiments, this may come from differences in batches, plates, reagents, and other experimental conditions.

“Statisticians work with scientists to ensure the samples represent the overall variability of the diseased population,” Christensen says. “These differences could be geographic, gender-based, or any number of demographic or disease-state characteristics. If we are to properly understand disease, we need to ensure samples show the variability of disease.”

Scientists are also using powerful statistical tools to help make cancer clinical trials more efficient and adaptive, by reducing the number of patients needed to test, as well as saving time and costs. For example, in traditional phase I cancer trials, researchers gradually increase the quantity of a medicine to determine the safest and most effective dose. But now, using a Bayesian Logistic Regression Model (BLRM), scientists can leverage prior research, such as pre-clinical and previous trial data, to help accelerate the dose escalation process and maximize the probability that treated patients receive safe and effective doses.

“We’re developing methods that are able to use all from the knowledge we have, then translating that into probabilistic models that help Pfizer to make decisions based on objective data,” says Roberto Bugarini, Executive Director, Head of Oncology Early Development Biostatistics at Pfizer. When it comes to cancer clinical trials, that include patients who are often critically ill, receiving the most effective dose as quickly as possible is crucial. “Our goal is to leverage all available information and use rigorous statistical methods   to establish the right dose and schedule and bring to patients safe and effective treatments as fast as possible,” he adds.

With the explosion of data, statisticians are key partners in deciding whether a treatment is working, or whether a certain drug program should continue to receive funding. “We’re helping to be more quantitative in our approach to drug development, so that we can funnel our resources to areas that are most likely to really impact patient communities,” says Christensen. 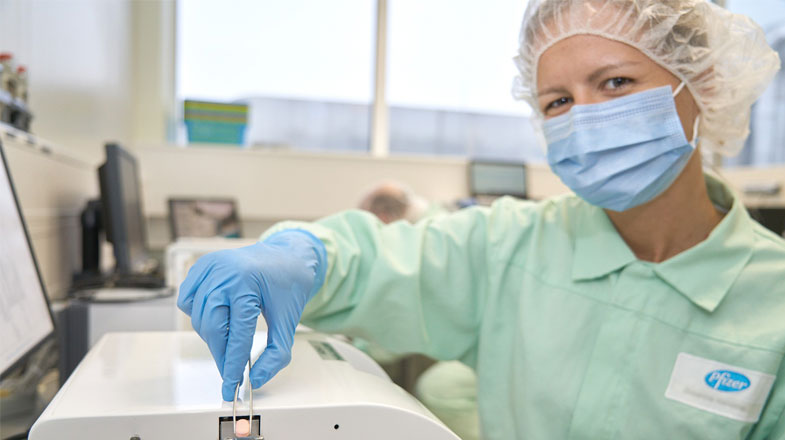 Making the COVID-19 Oral Treatment: How 2,000+ Pfizer Team Members Made It Happen

As the potential threat of COVID-19 became clear by early 2020, teams across Pfizer sprang into action. Together, they worked to better understand the novel virus. Hospitals were filling, and no one was sure how best to treat the people who were sick. While some infected people seemed to recover quickly, others were dying.