The images, unfortunately, have been too common for far too long: people young and old, refugees whose lives have been upended by forces beyond their control, fleeing their homes for safety. Watching it as it unfolds can make someone feel powerless. But what can one person do to make a difference?

That was the question Mona Babury asked herself in August 2021 when the Taliban seized control in Afghanistan. From her home near New York City, as she watched footage of Afghan refugees, the trauma was close to home: her husband, Farhad, is an Afghan refugee who moved to the United States when he was 5 years old. “In the 10 years we have been married I had never seen him so distraught and depressed watching the scenes on TV. People running for their lives, grabbing onto the plane wheels risking their lives to evacuate. I watched and I just remember feeling so helpless,” she says.

In her work at Pfizer, where she’s a Global Diversity, Equity, and Inclusion lead, a number of colleagues also have roots in Afghanistan, some are refugees. Questions ran wild through her head on how she could help: Where could she make donations? Should she foster a child? What could she do right now to make an impact?

That’s when the idea struck. She knew that Pfizer had nearly 1,000 open jobs it was trying to fill. What if they hired refugees for some of these open roles?

In the coming weeks and months, Babury would see that with the right partners, the right team, and the right intentions, anything is possible. Today, her idea is a formal program called the Pfizer Refugee Leadership Initiative. Its goal: to hire at least 100 refugees by the end of 2022 and mentor at least 150, 50 of whom identify as LGBTQ. As of mid-April 2022, Pfizer had hired 40 people through the initiative and had expanded from the U.S. to Pfizer offices in Greece, Germany, Belgium, and Italy, seeking to reach refugees from Ukraine as well as Afghanistan.

For Babury, the focus has given her, and many of her colleagues, a new sense of purpose and gratitude in their own lives. “There are a lot of tears and sleepless nights working on this program. It makes you appreciate everything we have—our safety, our homes, our families, our banks, our jobs, our educational institutes, our right to speak freely,” she says. “All these things we sometimes take for granted.”

From idea to initiative

It’s one thing to come up with a great idea. It’s another thing entirely to take it to the powers-that-be at a global organization and see it through. For Babury, just the thought of it felt empowering—but was it also naïve? Was it even possible for such a large company to move quickly enough to make a difference?

She shared the concept with her husband, and was emboldened by his response. “He said, ‘Mona, that would be absolutely incredible,” she recalls. Then she took it to an Afghan colleague she mentors, Senior Information Associate Negeena Niazi. She, too, loved the idea. So, Babury summoned the courage to email Pfizer’s Executive Vice President, Chief People Experience Officer, Payal Sahni.

She couldn’t have found a warmer reception, or a stronger advocate. For Sahni, it was also personal. An Afghan refugee herself, Sahni's family came to the United States when she was just 6 years old. Having worked at Pfizer for more than two decades, she knew deep down to her core that Babury’s idea would be a way of offering hope to people in need. “This," she thought, "is going to change lives.”

So Babury began researching organizations to partner with outside of the company. She learned about The Tent Partnership for Refugees, a non-profit organization that works with businesses to hire and train refugees. It was the ideal fit, and Pfizer, alongside more than two dozen other major businesses, joined the Tent Coalition for Afghan Refugees, committing to support and create opportunities for refugees.

Soon after, Pfizer’s CEO Albert Bourla—himself, an immigrant from Greece who is a naturalized U.S. citizen—sent out a company-wide email announcing the program as a formal initiative. When more than 300 employees volunteered to help mentor refugees, Babury cried tears of joy, watching her idea became a reality. She was named Pfizer’s Refugee Leadership Initiative lead and Niazi became its Program Manager.

Meanwhile, in August 2021, the Department of Homeland Security (DHS) launched the Operation Allies Welcome program to help resettle Afghan refugees. In collaboration with Hiring Our Heroes, the DHS invited Pfizer and other Tent Coalition businesses to participate in career fairs and information sessions at military bases where Afghan refugees were living temporarily.

Throughout the fall and winter, Babury traveled there, along with a team that included Niazi, who speaks Farsi and could act as a translator. They handed out flyers, notebooks, and pens, and they helped interested people register and apply for positions. They met people from all backgrounds—government workers, human rights activists, women’s rights activists, doctors, nurses, educators, actors, poets, and musicians—and were brought to their knees by the refugees' stories of escape, their courage, their trauma, and their need for jobs. Babury and the team could feel the urgency come through in follow-up communications. “We get emails from candidates that say 'I'm capable of working 14 hours a day. I will work weekends and holidays. I will work to make Pfizer proud,'” she says.

It wasn’t long before the team made their first hire: Mohammad Afzal Afzali, whom Babury had first met on LinkedIn and subsequently spoke with at a military base. He had been Chief of Staff at a university and a translator for the US Embassy, and he had needed to leave Afghanistan with his family at a moment’s notice. His story and his skills resonated, and Pfizer offered him a position that matched his skills. It’s been months since he began the job, but for Babury, the memory still moves her. “When he said, ‘Mona now we are colleagues,’ it was one of the proudest moments of my career,” she says.

Afzali, who now lives in Texas with his family, says his new job has changed the course of his life, allowing him to achieve his dreams. “I have found my life’s purpose in serving others and making them happy; likewise, Pfizer is all about breakthroughs that change patients’ lives,” he says. “Working for Pfizer, to me, means bringing hope to millions of people.”

In December 2021, Bard College in Annandale-on-Hudson, New York, announced it would take in as many as 100 threatened and displaced Afghan students and scholars. When Babury learned about those efforts through her network, she reached out to the school and offered, along with Sahni, to meet with those students and share information about Pfizer’s summer internship program.

While talking to the students in February 2022, Sahni shared her personal history as a refugee. Pfizer, she told them, had offered her a life-changing opportunity. Not only was she given an internship, but the company had agreed to pay for part of her graduate school costs. At the time, it was an enormous financial relief to her family, and they’ve never forgotten it. “To this day, my parents say, ‘Never leave Pfizer. This is an amazing place to work,’” says Sahni. When she celebrated her 25th anniversary with the company, she reflected on her early days, when the team at Pfizer saw something in her that she didn’t yet see. “When they started to believe in me, I started to believe in myself,” she says.

Now, she’s honored to be able to extend internship and employment opportunities to others and to serve as a role model. She knows that not only is it the right thing to do for business—according to a report by the Fiscal Policy Institute and the Tent Partnership for Refugees1, the refugee population has lower turnover and higher retention rates than other employees—it’s also simply the right thing to do as a human being.

In April 2022, Bourla and 34 other CEOs launched the Welcome.US CEO Council, pledging more than $75 million to support refugee resettlement organizations and non-profits and to welcome Afghan and Ukrainians coming to the U.S. The Council is partnering with Tent Partnership for Refugees, which by April 2022 had grown to include more than 220 businesses, to help organizations develop programs for hiring, mentorship, and training; Sahni and Babury were named co-chairs for the Employment and Training pillar of the Council.

“Having an internal champion like Mona is critical for the success of a refugee hiring initiative,” says Noni Rossini, Acting Executive Director at Tent. “Someone who is truly passionate about the cause, but that also understands the business benefits of bringing in this talented and diverse workforce. We are excited to continue to expand this work and inspire even more companies to follow Pfizer’s lead.”

When Babury thinks about the new and future hires, she thinks about all that they’ve lost. And she believes that a sense of community in the workplace can be a part of the good things they’ve found. “I hope that they know that these positions are not a hand out. That they deserve to be here. That we see what they can bring the table and that, at Pfizer, we welcome their diverse perspectives and experiences,” she says. “My wish for them is that they are successful in their new lives. That they have peace of mind knowing they are joining a workforce where they will be seen, heard, and cared for. My hope is that they feel a sense of community here.”

The work has also changed her. It’s shown her how one seemingly simple idea can take on a life of its own, and have a domino effect on many lives—professionally, as well as personally. “When I reflect back on this program, it will always be my life’s work. I am not sure anything else can top the impact I am honored to make through this role,” she says “My 8-year-old son looks at me with pride and says, ‘My mama is helping people and saving lives.’ Nothing can make me more proud.” 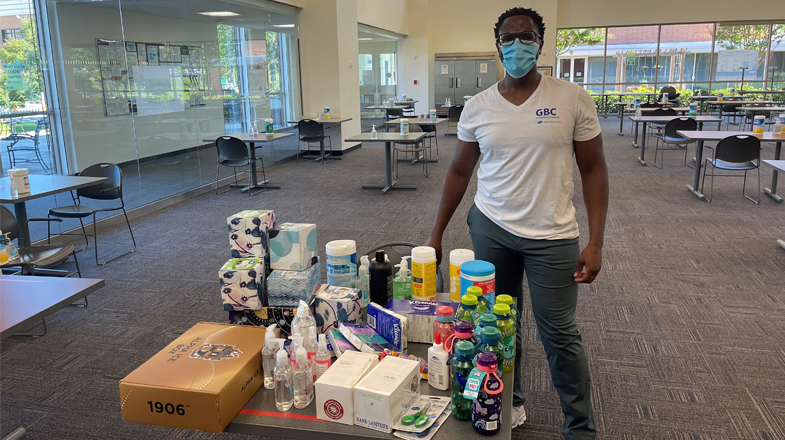 Meet The People of PGS: Terrari

Through the “People of PGS” series, we spotlight the names and faces behind the great work we do in PGS.  Next up is Terrari, a Continuous Improvement Specialist in Sanford, North Carolina, and co-lead of the site’s Global Black Community Colleague Resource Group chapter. 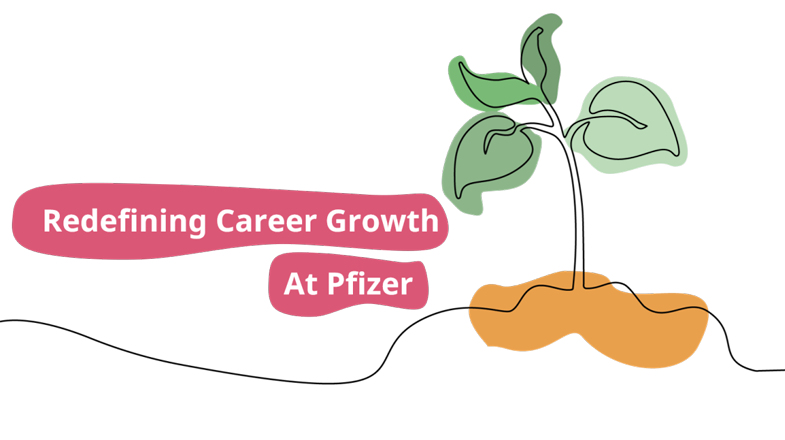 How Pfizer is fostering meaningful growth for every colleague, everywhere

Redefining Career Growth at Pfizer At Pfizer, we’re transforming and redefining ‘growth’ for our colleagues. To live and deliver on our purpose: breakthroughs that change patients’ lives, we need to continually grow ourselves and those around us. Doing this – while thinking big and pursuing bold goals – will help us to bring medicines and vaccines forward that can radically alter the course of a disease. We now see growth as a part of our DNA: We grow every day. In practice, this means promoting equitable growth opportunities for all our colleagues. 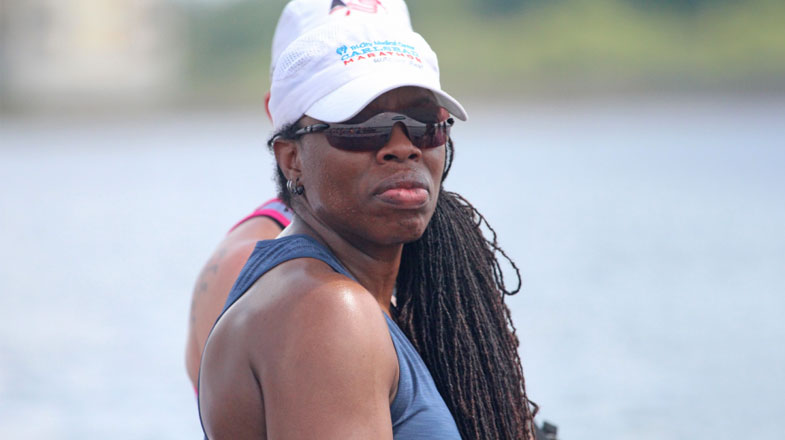 Meet The People Of PGS: Vanessa

Through the “People of PGS” series, we continue to spotlight the names and faces behind the great work we do in PGS. Next up is Vanessa, Site Leader at Meridian in St. Louis, who also has competed on Team USA’s Dragon Boat Racing team!